Data flows are usually the first components to be defined. System inputs and outputs are determined from interviewing, observing users, and analyzing documents and other existing systems. The information captured for each data flow may be summarized using a form containing the following information:

Once again we can use our World’s Trend Catalog Division example “A Data Flow Diagram (DFD) Example” from Chapter “Using Data Flow Diagrams” to illustrate a completed form. Figure illustrated below is an example of the data flow description representing the screen used to add a new CUSTOMER ORDER and to update the customer and item files. Notice that the external entity CUSTOMER is the source and that PROCESS 1 is the destination, providing linkage back to the data flow diagram. The checked box for “Screen” indicates that the flow represents an input screen. It could be any screen, such as a Web page, graphical user interface (GUI), mobile phone, or perhaps a mainframe screen. The detailed description of the data flow could appear on this form, or it could be represented as a data structure. 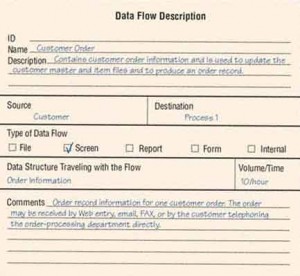 An example of a data flow description from World’s Trend Catalog Division.

Data flows for all inputs and outputs should be described first, because they usually represent the human interface, followed by the intermediate data flows and the data flows to and from data stores. The detail of each data flow is described using elements, sometimes called fields; a data structure; or a group of elements.

A simple data flow may be described using a single element, such as a customer number used by an inquiry program to find the matching customer record.

Figure illustrated below is an example of the data structure for adding a customer order at World’s Trend Catalog Division. Each NEW CUSTOMER screen consists of the entries found on the right side of the equal signs. Some of the entries are elements, but others, such as CUSTOMER NAME, ADDRESS, and TELEPHONE, are groups of elements or structural records. For example, CUSTOMER NAME is made up of FIRST NAME, MIDDLE INITIAL, and LAST NAME. Each structural record must be further defined until the entire set is broken down into its component elements. Notice that following the definition for the CUSTOMER ORDER screen are definitions for each structural record. Even a field as simple as the TELEPHONE NUMBER is defined as a structure so that the area code may be processed individually. 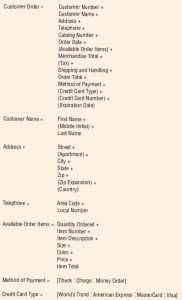