Each data element should be defined once in the data dictionary and may also be entered previously on an element description form, such as the one illustrated in the figure below. 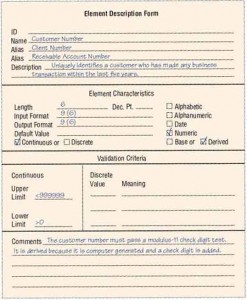 Characteristics commonly included on the element description form are the following:

Data element descriptions such as CUSTOMER NUMBER may be called CLIENT NUMBER elsewhere in the system (perhaps old code written with this alias needs to be updated). Another kind of data element is an alphabetic element. At World’s Trend Catalog Division, codes are used to describe colors: for example, BL for blue, WH for white, and GR for green. When this element is implemented, a table will be needed for users to look up the meanings of these codes. (Coding is discussed further in Chapter 15.)