The data dictionary may be used to create screens, reports, and forms. For example, examine the data structure for the World’s Trend ORDER PICKING SLIP in Figure 1. Because the necessary elements and their lengths have been defined, the process of creating physical documents consists of arranging the elements in a pleasing and functional way using design guidelines and common sense. Repeating groups become columns, and structural records are grouped together on the screen, report, or form. The report layout for the World’s Trend ORDER PICKING SLIP is shown in Figure 2. Notice that FIRST NAME and LAST NAME are grouped together in NAME, and that QUANTITY (PICKED and ORDERED), SECTION, SHELF NUMBER, ITEM NUMBER, ITEM DESCRIPTION, SIZE, and COLOR form a series of columns, because they are the repeating elements. 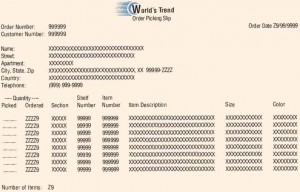 The data structure and elements for a data store are commonly used to generate corresponding computer language source code, which is then incorporated into computer programs. The data dictionary may be used in conjunction with a data flow diagram to analyze the system design, detecting flaws and areas that need clarification. Some considerations are: