The TreeView control implements a data structure known as a tree. A tree is the most appropriate structure for storing hierarchical information. The organizational chart of a company, for example, is a tree structure. Every person reports to another person above him or her, all the way to the president or CEO. Figure 4.21 depicts a possible organization of continents, countries, and cities as a tree. Every city belongs to a country, and every country to a continent. In the same way, every computer file belongs to a folder that may belong to an even bigger folder, and so on up to the drive level. You can’t draw large tree structures on paper, but it’s possible to create a similar structure in the computer’s memory without size limitations.

Each item in the tree of Figure 4.21 is called a node, and nodes can be nested to any level. Oddly, the top node is the root of the tree, and the subordinate nodes are called child nodes. If you try to visualize this structure as a real tree, think of it as an upside-down tree with the branches emerging from the root. The end nodes, which don’t lead to any other nodes, are called leaf nodes or end nodes.

Note: The items displayed on a TreeView control are just strings. Moreover, the TreeView control doesn’t require that the items be unique. You can have identically named nodes in the same branch — as unlikely as this might be for a real application. There’s no property that makes a node unique in the tree structure or even in its own branch.

You can also start with a city and find its country. The country node is the city node’s parent node. Notice that there is only one route from child nodes to their parent nodes, which means that you can instantly locate the country or continent of a city. The data of Figure 4.21 is shown in Figure 4.22 in a TreeView control. Only the nodes we’re interested in are expanded. The plus sign indicates that the corresponding node contains child nodes. To view them, click the button with the plus sign to expand the node.

Figure 4.22 – The tree implemented with a TreeView control

The tree structure is ideal for data with parent-child relations (relations that can be described as belongs to or owns). The continents-countries-cities data is a typical example. The folder structure on a hard disk is another typical example. Any given folder is the child of another folder or the root folder.

Of course, tic-tac-toe is a simple game. In principle, you could design a chess game by using a tree. This tree, however, would grow so large so quickly that it couldn’t be stored in any reasonable amount of memory. Moreover, scanning the nodes of this enormous tree would be an extremely slow process. If you also consider that chess moves aren’t just good or bad (there are better and not-so-good moves), and you must look ahead many moves to decide which move is the best for the current status of the board, you’ll realize that this ad hoc approach is totally infeasible. Practically speaking, such a program requires either infinite resources or infinite time. That’s why the chess-playing algorithms use heuristic approaches, which store every recorded chess game in a database and consult this database to pick the best next move.

The ListView control implements a simpler structure, known as a list. A list’s items aren’t structured in a hierarchy; they are all on the same level and can be traversed serially, one after the other. You can also think of the list as a multidimensional array, but the list offers more features. A list item can have subitems and can be sorted according to any column. For example, you can set up a list of customer names (the list’s items) and assign a number of subitems to each customer: a contact, an address, a phone number, and so on. Or you can set up a list of files with their attributes as subitems. Figure 4.23 shows a Windows folder mapped on a ListView control. Each file is an item, and its attributes are the subitems. As you already know, you can sort this list by filename, size, file type, and so on. All you have to do is click the header of the corresponding column. 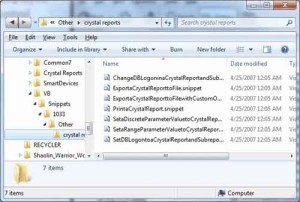