If the reliability of a telecommunications network is high, it is possible to have distributed systems for businesses, a setup that can be conceived of as an application of telecommunications. The concept of distributed systems is used in many different ways. Here it will be taken in a broad sense so that it includes workstations that can communicate with each other and data processors, as well as different hierarchical architectural configurations of data processors that communicate with each other and that have differing data storage capabilities.

In this model, the processing functions are delegated either to clients (users) or to servers, depending on which machines are most suitable for executing the work. In this type of architecture, the client portion of a network application will run on the client system, with the server part of the application running on the file server. With a client-server model, users interact with limited parts of the application, including the user interface, data input, database queries, and report generation. Controlling user access to centralized databases, retrieving or processing data, and other functions (such as managing peripheral devices) are handled by the server.

A more involved configuration uses three sets of computers to accomplish retrieval, processing, storage, and receiving of data. Figure illustrated below shows a three-tiered client-server model. In this figure, client computers access three different tiers of servers; Web servers, which handle Web-based exchange of information; application servers, which process data to and from the client computers and the database server; and the database server, which stores and receives data. The computers on the network are programmed to perform work efficiently by dividing up processing tasks among clients and servers. 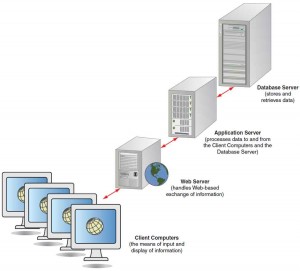 When you think of the client-server model, you should think of a system that accentuates the users as the center of the work, with their interaction with data being the key concept. Although there are two elements working—the client and the server—it is the intent of the client-server model that users view it as one system. Indeed, the hope is that users are unaware of how the client-server network is performing its distributed processing, because it should have the look and feel of a unified system. In a peer-to-peer network, PCs can act as either the server or the client, depending on the requirements of the application.

CLIENTS AS PART OF THE CLIENT-SERVER MODEL

When you see the term client, you might be tempted to think of people or users; for example, we speak of “clients of our consulting practice.” In the client-server model, however, the term client refers not to people but to networked machines that are typical points of entry to the client-server system that is used by humans. Therefore, clients could be networked desktop computers, a workstation, or notebook computers, or any other way in which the user can enter the system.

Using a graphical user interface (GUI), individuals typically interface directly only with the client part. Client workstations use smaller programs that reside in the client to do front-end processing (as opposed to the back-end processing, mentioned later), including communicating with the user. If an application is called a client-based application, the application resides in a client computer and cannot be accessed by other users on the network.

WEIGHING THE ADVANTAGES AND DISADVANTAGES OF THE CLIENT-SERVER MODEL

Although networks can be characterized by their shape or topology, they are also discussed in terms of their geographic coverage and the kinds of services they offer. Standard types of networks include a wide area network (WAN) and a local area network (LAN). LANs are standard for linking local computers or terminals within a department, building, or several buildings of an organization. WANs can serve users over several miles or across entire continents.

Networking is now technically, economically, and operationally feasible for small offices as well, and it provides a solution that analysts must consider for small businesses. One of the costly aspects of implementing a LAN is that each time it is moved, it must be rewired. Some organizations are coping with this by setting up a high-speed, wireless local area network (WLAN). More specifically, these wireless networks are called Wi-Fi.