Open and Save As, the two most widely used common dialog boxes (see Figure 4.13), are implemented by the OpenFileDialog and SaveFileDialog controls. Nearly every application prompts users for filenames, and the .NET Framework provides two controls for this purpose. The two dialog boxes are nearly identical, and most of their properties are common, so we’ll start with the properties that are common to both controls.

When either of the two controls is displayed, it rarely displays all the files in any given folder. Usually the files displayed are limited to the ones that the application recognizes so that users can easily spot the file they want. The Filter property limits the types of files that will appear in the Open or Save As dialog box. 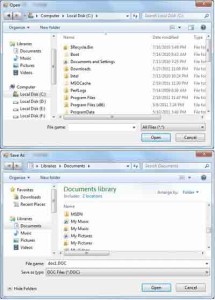 Figure 4.13 – The Open and Save As common dialog boxes

The extension of the default file type for the application is described by the DefaultExtension property, and the list of the file types displayed in the Save As Type box is determined by the Filter property.

To prompt the user for a file to be opened, use the following statements. The Open dialog box displays the files with the extension .bin only.

The following sections describe the properties of the OpenFileDialog and SaveFileDialog controls.

This property is a Boolean value that determines whether the dialog box automatically adds an extension to a filename if the user omits it. The extension added automatically is the one specified by the DefaultExtension property, which you must set before calling the ShowDialog method. This is the default extension of the files recognized by your application.

This property is a Boolean value that indicates whether the dialog box displays a warning if the user specifies a path that does not exist, as part of the user-supplied filename.

Use this property to retrieve the full path of the file selected by the user in the control. If you set this property to a filename before opening the dialog box, this value will be the proposed filename. The user can click OK to select this file or select another one in the control. The two controls provide another related property, the FileNames property, which returns an array of filenames. To find out how to allow the user to select multiple files, see the discussion of the MultipleFiles and FileNames properties in ‘‘VB 2008 at Work: Multiple File Selection” at the end of this section.

This property is used to specify the type(s) of files displayed in the dialog box. To display text files only, set the Filter property to Text files|*.txt. The pipe symbol separates the description of the files (what the user sees) from the actual extension (how the operating system distinguishes the various file types).

Don’t include spaces before or after the pipe symbol because these spaces will be displayed on the dialog box. In the Open dialog box of an image-processing application, you’ll probably provide options for each image file type, as well as an option for all images:

The expression Application.ExecutablePath returns the path in which the application’s executable file resides.

The following four properties are properties of the OpenFileDialog control only: FileNames, MultiSelect, ReadOnlyChecked, and ShowReadOnly.

If the Open dialog box allows the selection of multiple files (see the later section “VB 2008 at Work: Multiple File Selection”), the FileNames property contains the pathnames of all selected files. FileNames is a collection, and you can iterate through the filenames with an enumerator. This property should be used only with the OpenFileDialog control, even though the SaveFileDialog control exposes a FileNames property.

The OpenFile and SaveFile Methods

The OpenFileDialog control exposes the OpenFile method, which allows you to quickly open the selected file. Likewise, the SaveFileDialog control exposes the SaveFile method, which allows you to quickly save a document to the selected file. Normally, after retrieving the name of the file selected by the user, you must open this file for reading (in the case of the Open dialog box) or writing (in the case of the Save dialog box). The topic of reading from or writing to files is discussed in detail in Chapter, “Accessing Folders and Files.”

The Open dialog box allows the selection of multiple files. This feature can come in handy when you want to process files en masse. You can let the user select many files, usually of the same type, and then process them one at a time. Or, you might want to prompt the user to select multiple files to be moved or copied.

To allow the user to select multiple files in the Open dialog box, set the MultiSelect property to True. The user can then select multiple files with the mouse by holding down the Shift or Ctrl key. The names of the selected files are reported by the property FileNames, which is an array of strings. The FileNames array contains the pathnames of all selected files, and you can iterate through them and process each file individually.

One of this chapter’s sample projects is the MultipleFiles project, which demonstrates how to use the FileNames property. The application’s form is shown in Figure 4.14. The button at the top of the form displays the Open dialog box, where you can select multiple files. After closing the dialog box by clicking the Open button, the application displays the pathnames of the selected files on a ListBox control. 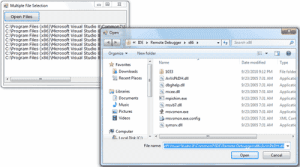