Both the FindString and FindStringExact methods perform case-insensitive searches. If you’re searching for visual, and the list contains the item Visual, both methods will locate it. Their syntax is the same:

where searchStr is the string you’re searching for. An alternative form of both methods allows you to specify the order of the item at which the search will begin:

The startIndex argument allows you to specify the beginning of the search, but you can’t specify where the search will end.

The FindString and FindStringExact methods work even if the ListBox control is not sorted. You need not set the Sorted property to True before you call one of the searching methods on the control. Sorting the list will help the search operation, but it takes the control less than 100 milliseconds to find an item in a list of 100,000 items, so time spent to sort the list isn’t worth it. Before you load thousands of items in a ListBox control, however, you should probably consider a more-functional interface.

The application you’ll build in this section (seen in Figure 4.5) populates a list with a large number of items and then locates any string you specify. Click the button Populate List to populate the ListBox control with 10,000 random strings. This process will take a few seconds and will populate the control with different random strings every time. Then, you can enter a string in the TextBox control at the bottom of the form. As you type characters (or even delete characters in the TextBox), the program will locate the closest match in the list and select (highlight) this item. 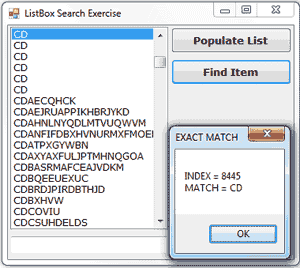 The sample application reacts to each keystroke in the TextBox control and locates the string you’re searching for instantly. The Find Item button does the same, but I thought I should demonstrate the efficiency of the ListBox control and the type of functionality you’d expect in a rich client application.

If you search for SAC, for example, and the control contains a string such as “SAC” or “sac” or “sAc”, the program will return the index of the item in the list and will report an exact match. If no exact match can be found, the program will return something like “SACDEF”, if such a string exists on the control, as a near match. If none of the strings on the control starts with the characters SAC, the search will fail.

The Populate List button creates 10,000 random items with the help of the Random class. First, it generates a random value in the range 1 through 20, which is the length of the string (not all strings have the same length). Then the program generates as many random characters as the length of the string and builds the string by appending each character to it. These random numbers are in the range of 65 to 91 and they’re the ANSI values of the uppercase characters.