To simplify the process of application development, Visual Studio provides an environment that’s common to all languages, which is known as an integrated development environment (IDE). The purpose of the IDE is to enable the developer to do as much as possible with visual tools, before writing code.

The IDE provides tools for designing, executing, and debugging your applications. It will be a while before you explore all the elements of the IDE, and I will explain the various items as needed in the course of the tutorial. In this section, you’ll look at the basic components of the IDE needed to build simple Windows applications. You’ll learn how its tools allow you to quickly design the user interface of your application, as well as how to program the application.

The IDE is your second desktop, and you’ll be spending most of your productive hours in this environment.

The Start Page in Visual Studio 2008

When you run Visual Studio 2008 for the first time, you will be prompted to select the type of projects you plan to build with Visual Studio, so that the environment can be optimized for that specific type of development. I’m assuming that you have initially selected the Visual Basic Development settings, which will optimize your copy of Visual Studio for building Windows and web applications with Visual Basic 2008. You can always change these settings, as explained at the end of this section.

After the initial configuration, you will see a window similar to the one shown in Figure 1.1. The Recent Projects pane will be empty, of course, unless you have already created some test projects. Visual Studio 2008 will detect the settings of a previous installation, so if you’re upgrading from an earlier version of Visual Studio, the initial screen will not be identical to the one shown in Figure 1.1. 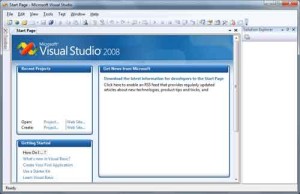 On the Start Page of Visual Studio, you will see the following panes:

Most developers will skip the Start Page. To do so, open the Tools menu and choose the Import And Export Settings command to start a configuration wizard. In the first dialog box of the wizard, select the Reset All Settings check box and click the Next button. The next screen of the wizard prompts you for the location where the new settings will be saved, so that Visual Studio can read them every time it starts. Leave the default location as is and click Next again to see the last screen of the wizard, in which you’re prompted to select a default collection of settings. This collection depends on the options you’ve installed on your system. I installed Visual Studio 2008 with Visual Basic only on my system, and I was offered the following options: General Development Settings, Visual Basic Development Settings, and Web Development Settings. For the default configuration of my copy of Visual Studio 2008, and for the purposes of this tutorial, I chose the Visual Basic Development Settings, so that Visual Studio could optimize the environment for a typical VB developer. Click the Finish button to see a summary of the process and then close the wizard.

Next Post: Starting a New Project in Visual Basic 2008 »