The form behaves better, but it’s not what you really expect from a Windows application. The problem with the form in Figure 5.7 in the section “Anchoring and Docking Controls to a Form” is that users can’t change the relative widths of the controls. In other words, they can’t make one of the controls narrower to make room for the other, which is a fairly common concept in the Windows interface.

First, place a SplitContainer control on the form. The SplitContainer consists of two Panels, the Panel1 and Panel2 controls, and a vertical splitter between them. This is the default configuration; you can change the orientation of the splitter by using the control’s Orientation property. Also by default, the two panels of the Splitter control are resized proportionally as you resize the form. If you want to keep one of the panels fixed and have the other take up the rest of the form, set the control’s FixedPanel property to the name of the panel you want to retain its size.

Now run the project and check out the functionality of the SplitContainer. Paste some text on the two controls and then change their relative sizes by sliding the splitter between them, as shown in Figure 5.8. We’ll call this example as Splitter Project 1. 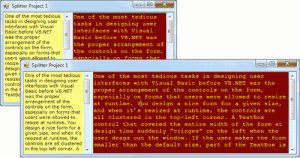 Figure 5.8 – The SplitContainer control lets you change the relative size of the controls on either side.

Let’s design a more elaborate form with two SplitContainer controls, such as the one shown in Figure 5.9. (we’ll call this the Splitter Project 2.) This form, which resembles the interface of Microsoft Office Outlook, consists of a TreeView control on the left (where the folders are displayed), a ListView control (where the selected folder’s items are displayed), and a TextBox control (where the selected item’s details are displayed). I’m using three TextBox controls with different background colors; the process of designing the form is identical, regardless of the controls you put on it. 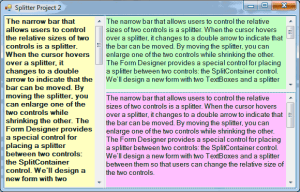 So far, you’ve seen what the Form Designer and the Form object can do for your application. Let’s switch our focus to programming forms and explore the events triggered by the Form object.