Encryption is a process of obfuscating data, thereby enhancing the data security. Generally, the concrete encryption procedure is carried out using an algorithm. The most important algorithm for encryption is called RSA. (It is an acronym for Rivers, Shamir, and Adelman, the last names of the three men who invented it.)

The Database Engine secures data with hierarchical encryption layers and a key management infrastructure. Each layer secures the layer beneath it, using a combination of certificates, asymmetric keys, and symmetric keys (see Figure 12-1).

An encryption system that uses symmetric keys is one in which the sender and receiver of a message share a common key. Thus, this single key is used for both encryption and decryption.

On the other hand, in a distributed environment, using this type of key can make it almost impossible to keep encryption secure, because the same key is used to decrypt and encrypt data on both ends. So, the general recommendation is that symmetric keys should be used only with applications in which data is stored as encrypted text at one place.

After you open a symmetric key, you need to use the EncryptByKey system function for encryption. This function has two input parameters: the ID of the key and text, which has to be encrypted. For decryption, you use the DecryptByKey function.

Note – See Books Online for detailed descriptions of all Transact-SQL statements related to symmetric keys as well as the system functions EncryptByKey and DecryptByKey.

After you create an asymmetric key, use the EncryptByAsymKey system function to encrypt data. This function has two input parameters: the ID of the key and text, which has to be encrypted. For decryption, use the DecryptByAsymKey function.

Note – See Books Online for detailed descriptions of all Transact-SQL statements related to asymmetric keys as well as the system functions EncryptByAsymKey and DecryptByAsymKey.

A public key certificate, usually simply called a certificate, is a digitally signed statement that binds the value of a public key to the identity of the person, device, or service that holds the corresponding private key. Certificates are issued and signed by a certification authority (CA). The entity that receives a certificate from a CA is the subject of that certificate.

A primary benefit of certificates is that they relieve hosts of the need to maintain a set of passwords for individual subjects. When a host, such as a secure web server, designates an issuer as a trusted authority, the host implicitly trusts that the issuer has verified the identity of the certificate subject.

Note – Certificates provide the highest level of encryption in the Database Engine security model. The encryption algorithms for certificates are very processor-intensive. For this reason, use certificates sparingly.

The most important statement related to certificates is the CREATE CERTIFICATE statement. Example 12.1 shows the use of this statement.

Example 12.1
If you want to create a certificate without the ENCRYPTION BY option, you first have to create the database master key. (Each CREATE CERTIFICATE statement that does not include this option is protected by the database master key.) For this reason, the first statement in Example 12.1 is the CREATE MASTER KEY statement. After that, the CREATE CERTIFICATE statement is used to create a new certificate, cert01, which is owned by dbo in the sample database, if the current user is dbo.

The most important catalog views in relation to encryption are the following:

Example 12.2 shows how the existing certificates can be retrieved. (In a similar way, you can get information concerning symmetric and asymmetric keys.) 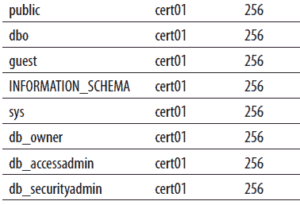 Another step in achieving greater key security is the use of Extensible Key Management (EKM). EKM has the following main goals:

EKM allows third-party vendors to register their devices in the Database Engine. Once the devices are registered, SQL Server logins can use the encryption keys stored on these modules as well as leverage advanced encryption features that these modules support. EKM also allows data protection from database administrators (except members of the sysadmin group). That way, you can protect the system against users with elevated privileges. Data can be encrypted and decrypted using Transact-SQL cryptographic statements, and SQL Server uses the external EKM device as the key store.

Encryption of the database file is performed at the page level. The pages in an encrypted database are encrypted before they are written to disk and decrypted when they are read into memory.

TDE, like most other encryption methods, is based on an encryption key. It uses a symmetric key, which secures the encrypted database.

For a particular database, TDE can be implemented in four steps: