To manage database security, you can use

The following subsections describes both ways to manage database security.

To add users to a database using SQL Server Management Studio, expand the server, expand the Databases folder, expand the database, and expand Security. Right-click Users and click New User. In the Database User dialog box (see Figure 12-3), enter a username and choose a corresponding login name. Optionally, you can choose a default schema for this user. 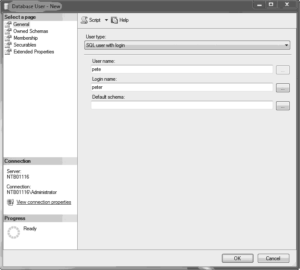 The CREATE USER statement adds a user to the current database. The syntax of this statement is user_name is

user_name is the name that is used to identify the user inside the database. login specifies the login for which the user is being created. cert_name and key_name specify the corresponding certificate and asymmetric key, respectively. Finally, the WITH DEFAULT SCHEMA option specifies the first schema that will be searched by the server when it resolves the names of objects for this database user.

Example 12.7 demonstrates the use of the CREATE USER statement.

The first CREATE USER statement creates the database user called peter for the Windows login called pete. pete will use dbo as its default schema because the DEFAULT SCHEMA option is omitted. (Default schemas will be described in the section “Default Database Schemas” later in this chapter.)

The second CREATE USER statement creates a new database user with the name mary. This user has my_schema as her default schema. (The DEFAULT_SCHEMA option can be set to a schema that does not currently exist in the database.)

Note – Each database has its own specific users. Therefore, the CREATE USER statement must be executed once for each database where a user account should exist. Also, a SQL Server login can have only a single corresponding database user for a given database.

The DROP USER statement removes a user from the current database. Users that own securables (that is, database objects) cannot be dropped from the database.

Each database within the system has the following default database schemas:

The Database Engine allows users without user accounts to access a database using the guest schema. (After creation, each database contains this schema.) You can apply permissions to the guest schema in the same way as you apply them to any other schema. Also, you can drop and add the guest schema from any database except the master and tempdb system databases.

The INFORMATION_SCHEMA schema contains all information schema views. The sys schema, as you may have already guessed, contains system objects, such as catalog views.