The Visual Basic compiler provides three options that determine how it handles variables:

These options have a profound effect on the way you declare and use variables, and you should understand what they do. By exploring these settings, you will also understand a little better how the compiler handles variables. It’s recommended that you turn on all three of them, but old VB developers may not follow this advice.

VB 2008 doesn’t require that you declare your variables, but the default behavior is to throw an exception if you attempt to use a variable that hasn’t been previously declared. If an undeclared variable’s name appears in your code, the editor will underline the variable’s name with a wiggly line, indicating that it caught an error. The description of the error will appear in the Task List below the code window. If you rest the pointer over the segment of the statement in question, you will see the description of the error in a ToolTip box.

To change the default behavior, you must insert the following statement at the beginning of the file:

The Option Explicit statement must appear at the very beginning of the file. This setting affects the code in the current module, not in all files of your project or solution. You can turn on the Strict (as well as the Explicit) option for an entire solution. Open the solution’s properties dialog box (right-click the solution’s name in Solution Explorer and select Properties), select the Compile tab, and set the Strict and Explicit options accordingly, as shown in Figure 2.1. 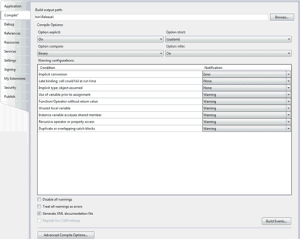 Figure 2.1 – Setting the variable-related options on the project’s Properties pages 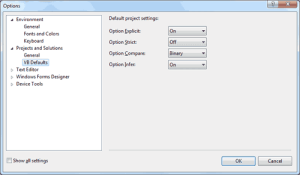 The default value of the Explicit statement is On. This is also the recommended value, and you should not make a habit of changing this setting. In the section “Reasons for Decalring Variables” later in this chapter, you will see an example of the pitfalls you’ll avoid by declaring your variables. By setting the Explicit option to Off, you’re telling VB that you intend to use variables without declaring them. As a consequence, VB can’t make any assumption about the variable’s type, so it uses a generic type of variable that can hold any type of information. These variables are called Object variables, and they’re equivalent to the old variants.

While the option Explicit is set to Off, every time Visual Basic runs into an undeclared variable name, it creates a new variable on the spot and uses it. The new variable’s type is Object, the generic data type that can accommodate all other data types. Using a new variable in your code is equivalent to declaring it without type. Visual Basic adjusts its type according to the value you assign to it. Create two variables, var1 and var2, by referencing them in your code with statements like the following ones:

The var1 variable is a string variable, and var2 is a numeric one. You can verify this with the GetType method, which returns a variable’s type. The following statements print the highlighted types shown below each statement:

If you execute the preceding statements again, you’ll see that the types of the variables have changed. The var1 variable is now a Double, and var2 is a String. The type of a generic variable is determined by the variable’s contents and it can change in the course of the application. Of course, changing a variable’s type at runtime doesn’t come without a performance penalty (a small one, but nevertheless some additional statements must be executed).

If you turn the Strict option on by inserting the following statement at the beginning of the file, you won’t be able to mix and match variable types:

If you attempt to execute any of the last two code segments while the Strict option is on, the compiler will underline a segment of the statement to indicate an error. If you rest the pointer over the underlined segment of the code, the following error message will appear in a tip box:

(or whatever type of conversion is implied by the statement).

When the Strict option is set to On, the compiler doesn’t disallow all implicit conversions between data types. For example, it will allow you to assign the value of an integer to a Long, but not the opposite. The Long value might exceed the range of values that can be represented by an Integer variable. You will find more information on implicit conversions in the section titled “Widening and Narrowing Conversions in VB.NET 2008,” later in this chapter.