One-dimensional arrays, such as those presented so far, are good for storing long sequences of one-dimensional data (such as names or temperatures). But how would you store a list of cities and their average temperatures in an array? Or names and scores; years and profits; or data with more than two dimensions, such as products, prices, and units in stock? In some situations, you will want to store sequences of multidimensional data. You can store the same data more conveniently in an array of as many dimensions as needed.

Figure 2.5 shows two one-dimensional arrays — one of them with city names, the other with temperatures. The name of the third city would be City(2), and its temperature would be Temperature(2).

The benefit of using multidimensional arrays is that they’re conceptually easier to manage. Suppose that you’re writing a game and want to track the positions of certain pieces on a board. Each square on the board is identified by two numbers: its horizontal and vertical coordinates. The obvious structure for tracking the board’s squares is a two-dimensional array, in which the first index corresponds to the row number, and the second corresponds to the column number.

The array could be declared as follows:

And you assign 1 to the square to which it was moved to indicate the new state of the board:

To find out whether a piece is on the top-left square, you’d use the following statement:

This notation can be extended to more than two dimensions. The following statement creates an array with 1,000 elements (10 by 10 by 10): 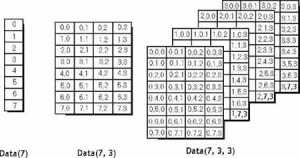 Figure 2.6 – Pictorial representations of one-, two-, and three-dimensional arrays

You should break the line that initializes the dimensions of the array into multiple lines to make your code easier to read. Just insert the line continuation character at the end of each continued line:

If the array has more than one dimension, you can find out the number of dimensions with the Array.Rank property. Let’s say you have declared an array for storing names and salaries by using the following statements:

To find out the number of dimensions, use the following statement:

Because the index of the first array element is zero, the index of the last element is the length of the array minus 1. Let’s say you have declared an array with the following statement to store
player statistics for 15 players, and there are five values per player:

The following statements will return the highlighted values shown beneath them:

Multidimensional arrays are becoming obsolete because arrays (and other collections) of custom structures and objects are more flexible and convenient.