Arrays are indexed sets of data, and this is how we’ve used them so far in this website. In this section, you will learn about additional members that make arrays extremely flexible. The System.Array class provides methods for sorting arrays, searching for an element, and more. In the past, programmers spent endless hours writing code to perform the same operations on arrays, but the Framework frees them from similar counterproductive tasks.

This chapter starts with a discussion of the advanced features of the Array class. After you know how to make the most of arrays, We’ll discuss the limitations of arrays and then move on to other collections that overcome these limitations.

To sort an array, call its Sort method. This method is heavily overloaded and, as you will see, it is possible to sort an array based on the values of another array, or even supply your own custom sorting routines. If the array is sorted, you can call the BinarySearch method to locate an element very efficiently. If not, you can still locate an element in the array by using the IndexOf and LastIndexOf methods. The Sort method is a reference method: It requires that you supply the name of the array to be sorted as an argument. The simplest form of the Sort method accepts a single argument, which is the name of the array to be sorted:

An interesting variation of the Sort method sorts the elements of an array according to the values of the elements in another array. Let’s say you have one array of names and another of matching Social Security numbers. It is possible to sort the array of names according to their Social Security numbers. This form of the Sort method has the following syntax: 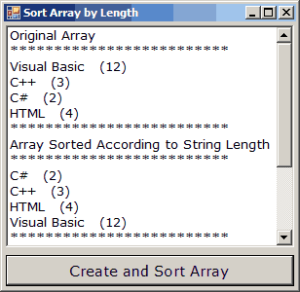 The code, which also displays the arrays before and after sorting, is shown in Listing 10.1.

Listing 10.1: Sorting an Array According to the Length of Its Elements

The output produced by the SortArrayByLength application in the ListBox control is shown here:

The array with the keys that determine the order of the elements can be anything. If the array to be sorted holds some rectangles, you can create an auxiliary array that contains the area of the rectangles and sort the original array according to the area of its rectangles. Likewise, an array of colors can be sorted according to the hue or the luminance of each color component, and so on.

Another form of the Sort method uses a user-supplied function to sort arrays of customobjects. As you recall, arrays can store all types of objects. But the Framework doesn’t know how to sort your custom objects. To sort an array of objects, you must provide your own class that implements the IComparer interface (basically, a function that can compare two instances of a custom class). This form of the Sort method is described in detail in the section titled ‘‘Custom Sorting,’’ later in this chapter. By the way, you can create a function to sort an array based on the length of its elements or any other property of its elements, similar to the Sort method that uses the items of an auxiliary array as keys.