To get an idea of how efficiently the StringBuilder manipulates strings, Figure 9.1 shows an application that reverses a string. The program reverses two strings — one declared as String, and another one declared as StringBuilder. Note that neither the String nor the StringBuilder class exposes a method for reversing the order of the characters in a string. Actually, the String class exposes a Reverse method, which returns a collection of characters — the least useful implementation of a string reversal method, in my opinion. However, you can use the StrReverse() function in this project to reverse a string with a single function call. In this example, we’ll reverse the strings by swapping individual characters to time the two classes. 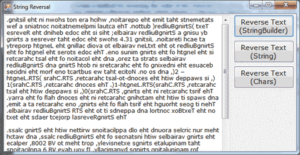 To reverse a string variable, we use the string-manipulation functions of VB, because the String class doesn’t provide any methods that act directly on the string (you cannot even manipulate a string through its Chars property, because this property is read-only). Unlike the methods of the StringBuilder class, the equivalent VB functions use the index 1 for the first character of the string. The Mid() function extracts a character from a string, and the Mid statement replaces one of the existing characters with another one. Listing 9.5 is the code of the Click event handler of the Reverse Text (String) button. The project contains a few more statements to time the operations, and they’re discussed in the following section.

Notice the statement that replaces carriage returns and line feeds. On the TextBox control, each line is terminated with the sequence Chr(10) & Chr(13) (the vbCrLf constant). When the order of these two characters is reversed, they will no longer change lines on the TextBox control. This statement restores the line-feed/carriage-return combination back to its original state.

To reverse the characters by using the String data type, I’ve used the straightforward approach that most VB developers would. The string-manipulation functions are so slow compared to the methods of the StringBuilder class, there just had to be a better way. Indeed, you can store the characters that make up the text in an array and then reverse the elements of this array.

The operation is much faster than using string-manipulation functions; it takes almost half a second to reverse a 90,000 character string. However, it takes the StringBuilder class a few milliseconds to do the same. If you’re interested in seeing an example of manipulating a string as an array of characters, see the code behind the Reverse Text (Chars) button on the application’s form. The core of the string reversal code is the following: