The system catalog consists of tables describing the structure of objects such as databases, base tables, views, and indices. (These tables are called system base tables.) The Database Engine frequently accesses the system catalog for information that is essential for the system to function properly.

Note – The system base tables cannot be accessed directly: you have to use existing interfaces to query the information from the system catalog.

There are several different interfaces that you can use to access the information in the system base tables:

Figure 9-1 shows a simplified form of the Database Engine’s system information and different interfaces that you can use to access it. 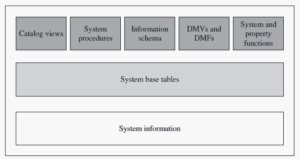 Note – This chapter shows you just an overview of the system catalog and the ways in which you can access metadata. Particular catalog views, as well as all other interfaces, that are specific for different topics (such as indices, security, etc.) are discussed in the corresponding chapters.

These interfaces can be grouped in two groups: general interfaces (catalog views, DMVs and DMFs, and the information schema), and proprietary interfaces in relation to the Database Engine (system stored procedures and system and property functions).

Note – “General” means that all relational database systems support such interfaces, but use different terminology. For instance, in Oracle’s terminology, catalog views and DMVs are called “data dictionary views” and “V$ views,” respectively.