In the previous chapters, base tables were used to describe DDL and DML statements. A base table contains data stored on the disk. By contrast, views, by default, do not exist physically—that is, their content is not stored on the disk. (This is not true for so-called indexed views, which are discussed later in this chapter.) Views are database objects that are always derived from one or more base tables (or views) using metadata information. This information (including the name of the view and the way the rows from the base tables are to be retrieved) is the only information concerning views that is physically stored. Thus, views are also called virtual tables.

A view is created using the CREATE VIEW statement. The general form of this statement is

Note – The CREATE VIEW statement must be the only statement in a batch. (This means that you have to use the GO statement to separate this statement from other statements in a statement group.)

view_name is the name of the defined view. column_list is the list of names to be used for columns in a view. If this optional specification is omitted, column names of the underlying tables are used. select_statement specifies the SELECT statement that retrieves rows and columns from one or more tables (or views). The WITH ENCRYPTION option encrypts the SELECT statement, thus enhancing the security of the database system.

The SCHEMABINDING clause binds the view to the schema of the underlying table. When SCHEMABINDING is specified, database objects referenced in the SELECT statement must include the two-part names in the form owner.db_object, where db_object may be a table, a view, or a user-defined function.

Any attempt to modify the structure of views or tables that are referenced in a view created with this clause fails. You have to drop the view or change it so that it no longer has the SCHEMABINDING clause if you want to apply the ALTER or DROP statement to the referenced objects. (The WITH CHECK OPTION clause is discussed in detail later in this chapter in the section “INSERT Statement and a View.”)

When a view is created with the VIEW_METADATA option, all of its columns (except columns with the TIMESTAMP data type) can be updated if the view has INSERT or UPDATE INSTEAD OF triggers.

Note – The SELECT statement in a view cannot include the ORDER BY clause or INTO option. Additionally, a temporary table cannot be referenced in the query.

Views can be used for different purposes:

Example 11.1 shows the creation of a view.

Example 11.1 specifies the selection of rows—that is, it creates a horizontal subset from the base table works_on. It is also possible to create a view that limits the columns as well as the rows to be included in the view. Example 11.2 shows the creation of such a view.

The v_without_budget view in Example 11.2 contains all columns of the project table except the budget column.

Table 11-1 The Base Table works_on 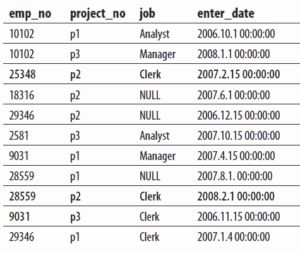 As already stated, specifying column names with a view in the general format of the CREATE VIEW statement is optional. On the other hand, there are also two cases in which the explicit specification of column names is required:

The column names of the v_count view in Example 11.3 must be explicitly specified because the SELECT statement contains the aggregate function COUNT(*), and all columns in a view must be named.

You can avoid the explicit specification of the column list in the CREATE VIEW statement if you use column headers, as in Example 11.4.

A view can be derived from another existing view, as shown in Example 11.5.

You can also create a view using Object Explorer of SQL Server Management Studio. Select the database under which you want to create the view, right-click Views, and choose New View. The corresponding editor appears. Using the editor, you can do the following: