User-Defined Functions are created with the CREATE FUNCTION statement, which has the following syntax:

schema_name is the name of the schema to which the ownership of the created UDF is assigned. function_name is the name of the new function. @param is an input parameter, while type specifies its data type. Parameters are values passed from the caller of the UDF and are used within the function. default specifies the optional default value of the corresponding parameter. (Default can also be NULL.)

The WITH ENCRYPTION option encrypts the information in the system catalog that contains the text of the CREATE FUNCTION statement. In that case, you cannot view the text used to create the function. (Use this option to enhance the security of your database system.)

Database objects that are referenced by a function must fulfill the following conditions if you want to use the SCHEMABINDING clause during the creation of that function:

block is the BEGIN/END block that contains the implementation of the function. The final statement of the block must be a RETURN statement with an argument. (The value of the argument is the value returned by the function.) In the body of a BEGIN/END block, only the following statements are allowed:

Example 8.18 shows the creation of the function called compute_costs.

The function compute_costs computes additional costs that arise when all budgets of projects increase. The single input variable, @percent, specifies the percentage of increase of budgets. The BEGIN/END block first declares two local variables: @additional_costs and @sum_budget. The function then assigns to @sum_budget the sum of all budgets, using the SELECT statement. After that, the function computes total additional costs and returns this value using the RETURN statement.

Each UDF can be invoked in Transact-SQL statements, such as SELECT, INSERT, UPDATE, or DELETE. To invoke a function, specify the name of it, followed by parentheses. Within the parentheses, you can specify one or more arguments. Arguments are values or expressions that are passed to the input parameters that are defined immediately after the function name. When you invoke a function, and all parameters have no default values, you must supply argument values for all of the parameters and you must specify the argument values in the same sequence in which the parameters are defined in the CREATE FUNCTION statement.

Example 8.19 shows the use of the compute_costs function (Example 8.18) in a SELECT statement.

Note – Each function used in a Transact-SQL statement must be specified using its two-part name—that is, schema_name.function_name.

As you already know, functions are table-valued if the RETURNS clause returns a set of rows. Depending on how the body of the function is defined, table-valued functions can be classified as inline or multistatement functions. If the RETURNS clause specifies TABLE with no accompanying list of columns, the function is an inline function. Inline functions return the result set of a SELECT statement as a variable of the TABLE data type (see Example 8.20). A multistatement table-valued function includes a name followed by TABLE. (The name defines an internal variable of the type TABLE.) You can use this variable to insert rows into it and then return the variable as the return value of the function.

Example 8.20 shows a function that returns a variable of the TABLE data type.

The employees_in_project function is used to display names of all employees that belong to a particular project. The input parameter @pr_number specifies a project number. While the function generally returns a set of rows, the RETURNS clause contains the TABLE data type. (Note that the BEGIN/END block in Example 8.20 must be omitted, while the RETURN clause contains a SELECT statement.)

Example 8.21 shows the use of the employees_in_project function.

The fn_getjob() function in Example 8.22 returns the set of rows from the works_on table. This result set is “joined” in Example 8.23 with the content of the employee table. 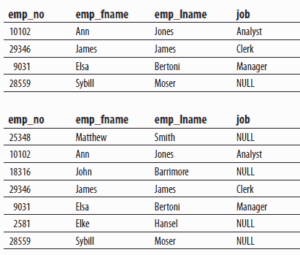 In the first query of Example 8.23, the result set of the table-valued function fn_getjob() is “joined” with the content of the employee table using the CROSS APPLY operator. fn_getjob() acts as the right input, and the employee table acts as the left input. The right input is evaluated for each row from the left input, and the rows produced are combined for the final output.

The second query is similar to the first one, but uses OUTER APPLY, which corresponds to the outer join operation of two tables.

In all versions previous to SQL Server 2008, it was difficult to send many parameters to a routine. In that case you had to use a temporary table, insert the values into it, and then call the routine. Since SQL Server 2008, you can use table-valued parameters to simplify this task. These parameters are used to deliver a result set to the corresponding routine.

Example 8.24 shows the use of a table-valued parameter.

Example 8.24 first defines the type called departmentType as a table. This means that its type is the TABLE data type, so rows can be inserted in it. In the insertProc procedure, the @Dallas variable, which is of the departmentType type, is specified. (The READONLY clause specifies that the content of the table variable cannot be modified.) In the subsequent batch, data is added to the table variable, and after that the procedure is executed. The procedure, when executed, inserts rows from the table variable into the temporary table #dallasTable. The content of the temporary table is as follows:

The use of table-valued parameters gives you the following benefits: