The Next method of the System.Random class returns an integer value from –2,147,483,648 to 2,147,483,647. (This is the range of values that can be represented by the Integer data type.) We should also be able to generate random numbers in a limited range of integer values. To emulate the throw of a die, we want a random value in the range from 1 to 6, whereas for a roulette game we want an integer random value in the range from 0 to 36. You can specify an upper limit for the random number with an optional integer argument. The following statement will return a random integer in the range from 0 to 99:

You can also specify both the lower and upper limits of the random number’s range. The following statement will return a random integer in the range from 1,000 to 1,999:

The same method behaves differently based on the arguments we supply. The behavior of the method depends either on the type of the arguments, the number of the arguments, or both. As you will see, there’s no single function that alters its behavior based on its arguments. There are as many different implementations of the same function as there are argument combinations. All the functions share the same name, so they appear to the user as a single multifaceted function. These functions are overloaded, and you’ll see how they’re implemented in the following section.

If you haven’t turned off the IntelliSense feature of the editor, as soon as you type the opening parenthesis after a function or method name, you see a yellow box with the syntax of the function or method. You’ll know that a function, or a method, is overloaded when this box contains a number and two arrows. Each number corresponds to a different overloaded form, and you can move to the next or previous overloaded form by clicking the two little arrows or by pressing the arrow keys.

By accepting Double values as arguments, this function can handle all numeric types. VB 2008 performs automatic widening conversions (it can convert Integers and Decimals to Doubles), so this trick makes the function work with all numeric data types. However, what about strings? If you attempt to call the Min() function with two strings as arguments, you’ll get an exception. The Min() function just can’t handle strings.

To write a Min() function that can handle both numeric and string values, you must, in essence, write two Min() functions. All Min() functions must be prefixed with the Overloads keyword. The following statements show two different implementations of the same function:

We need a third overloaded form of the same function to compare dates. If you call the Min() function, passing as an argument two dates, as in the following statement, the Min() function will compare them as strings and return (incorrectly) the first date.

This statement is not even valid when the Strict option is on, so you clearly need another overloaded form of the function that accepts two dates as arguments, as shown here:

Let’s look into a more complicated overloaded function, which makes use of some topics discussed later in this tutorial. The CountFiles() function counts the number of files in a folder that meet certain criteria. The criteria could be the size of the files, their type, or the date they were created. You can come up with any combination of these criteria, but the following are the most useful combinations. (These are the functions I would use, but you can create even more combinations or introduce new criteria of your own.) The names of the arguments are self-descriptive, so I need not explain what each form of the CountFiles() function does.

Listing 3.10 shows the implementation of these overloaded forms of the CountFiles() function. (I’m not showing all overloaded forms of the function; you can open the OverloadedFunctions project in the IDE and examine the code.) Because we haven’t discussed file operations yet, most of the code in the function’s body will be new to you — but it’s not hard to follow. For the benefit of readers who are totally unfamiliar with file operations, I included a statement that prints in the Immediate window the type of files counted by each function. The Debug.WriteLine statement prints the values of the arguments passed to the function, along with a description of the type of search it will perform. The overloaded form that accepts two integer values as arguments prints something like this:

whereas the overloaded form that accepts a string as an argument prints the following:

Listing 3.10: The Overloaded Implementations of the CountFiles() Function

If you’re unfamiliar with the Directory and File objects, focus on the statement that prints to the Immediate window and ignore the statements that actually count the files that meet the specified criteria. After reading Chapter, “Accessing Folders and Files,” you can revisit this example and understand the statements that select the qualifying files and count them.

Start a new project and enter the definitions of the overloaded forms of the function on the form’s level. Listing 3.10 is lengthy, but all the overloaded functions have the same structure and differ only in how they select the files to count. Then place a TextBox and a button on the form, as shown in Figure 3.2, and enter a few statements that exercise the various overloaded forms of the function (such as the ones shown in Listing 3.11) in the button’s Click event handler. 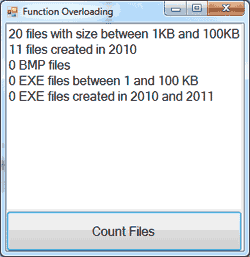 Listing 3.11: Testing the Overloaded Forms of the CountFiles() Function

The button calls the various overloaded forms of the CountFiles() function one after the other and prints the results on the TextBox control. From now on, I’ll be omitting the list of arguments in the most common event handlers, such as the Click event handler, because they’re always the same and they don’t add to the readability of the code. In place of the two arguments, I’ll insert an ellipsis to indicate the lack of the arguments.

Figure 3.3 – The overloaded forms of the CountFiles() function