A standard structure for storing data in any programming language is the array. Whereas individual variables can hold single entities, such as one number, one date, or one string, arrays can hold sets of data of the same type (a set of numbers, a series of dates, and so on). An array has a name, […]

Here’s an example that initializes an array of strings:

This statement is equivalent to the following statements, which declare an array with two […] 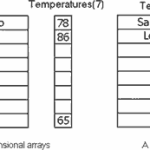 One-dimensional arrays, such as those presented so far, are good for storing long sequences of one-dimensional data (such as names or temperatures). But how would you store a list of cities and their average temperatures in an array? Or names and scores; years and profits; or data with more than two dimensions, such as products, […]

Sometimes you may not know how large to make an array. Instead of making it large enough to hold the (anticipated) maximum number of data (which means that, on the average, part of the array may be empty), you can declare a dynamic array. The size of a dynamic array can vary during the course […]